Robert N. Watson, Associate Dean of Humanities and Distinguished Professor of English at UCLA, has just published a book Throne of Blood, about the Akira Kurosawa film of the same name. As a supplement to the book, Dr. Watson has exhaustively annotated the film for ClipNotes and we are proud to host his annotation file, authored in collaboration with Nicole Malek. The XML file is free to download and — used with the inexpensive ClipNotes app and a DVD of the film — instantly launches any of over a hundred sequences from the film with explanatory text underneath.

To use the Throne of Blood Annotation XML file: right-click on PC or control-click on Mac and select ‘save as’ to download the file to your computer, then follow our how-to section to set it up with ClipNotes on your device, which you can download for iOS and Windows. Please browse the rest of this website for more information. 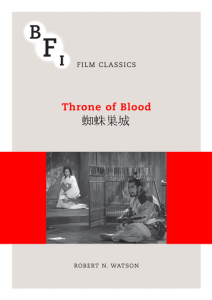 Throne of Blood is part of the BFI Film Classics series published by the British Film Institute and Palgrave MacMillan.  The publisher’s book description:

Kurosawa’s Throne of Blood (1957) is widely regarded as the greatest film adaptation of Shakespeare’s Macbeth. This fascinating interpretation of the film explores how Kurosawa draws key philosophical and psychological arguments from Shakespeare, translates them into strong visual metaphors, and inflects them through the cultural history of Japan.